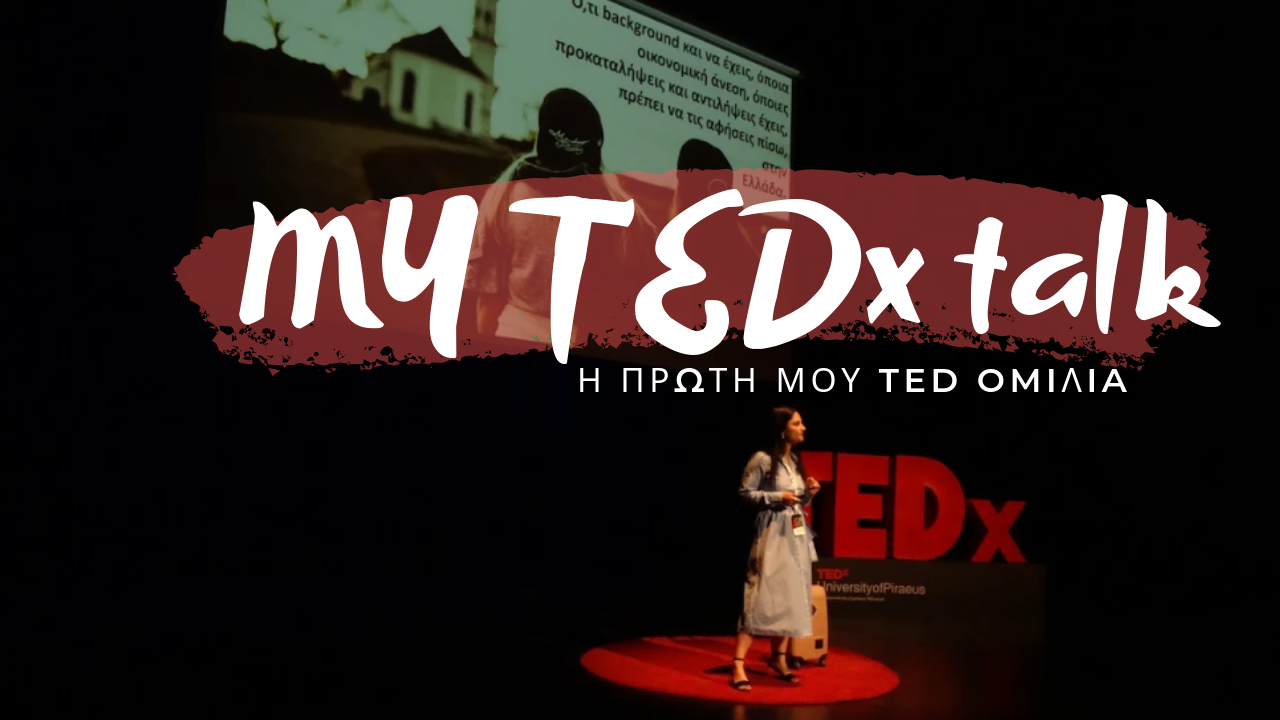 ‘’My name is Nicoleta and I represent TEDx University of Piraeus 2019. We are glad to have you invited
as a speaker in this year’s TEDx University of Piraeus, an independently organized TED conference.
Having followed your activity and, being aware of your attempt to spread positive thoughts, it would be
our pleasure to join our team. Your choice to travel around the world as a solo traveler keeps inspiring
more and more people- especially women- to give it a go, in order to gain themselves new experiences.
Your travel with the Trans-Siberian was rather impressive, as was the experience you described at the
Mongolian steppe. The ‘’solo women groups’’, which have recently started, are also equally interesting,
and we would like you to refer to them during your speech. ‘’

In such a way, so simply and beautifully I was invited by the TEDxUniPi team to talk to TED. I still
remember the first minutes when I read my e-mail five months ago, entitled as ‘’TEDx University of
Piraeus- Invitation’’, I burst into tears. Even tough it sounds weepy, yes, I did cry! After 7 years in the
field of travel blogging and having great experience from the beginning, when travel blogs were absent
in Greece, until the present, when everyone has become Instagrammer and Influencer, the fact of being
called by TED to talk about your personal route, your dreams, your beliefs, and everything you have
accomplished so far in addition to the things you dream of in the future, is a great honor and ,at the
same time, a personal achievement and acknowledgment.

After the first thrill, my mind started ‘’running’’ far far away. Alright, what am I supposed to say now?
Where should I start from? How is my speech going to be motivational? How could I inspire all the
listeners? My hands started sweating. Where do I begin? What do I say? What do I skip?
At that point, another e-mail arrives, informing me on two subjects: Firstly, on the theme of this year’ s
TED, which will focus on the matter of ‘’switch perspect’’ and secondly, that it would be better for me to
learn my speech by heart, so I can go to the rehearsal, and rehearse my speech within the timeframe of
17-18 minutes.
Months passed by, and April had arrived, it was around Easter, when I had relaxed being in Greece, that
I started writing my speech. It took me one day to start the first paragraph. I had no idea how backwards
should I go, and what would the main topic be. A whole day passed without producing a single word.
And then I just started. I wrote the first sentence and that was it. The hand and mind in absolute
cooperation. Paragraph after paragraph I hopefully reached ten pages of speech. Ten pages. I pressed
save and sat to read them.

One more time, after the first e-mail, that I was in tears. Yes, I was proud for
everything I did, for all those nights when I was crying in my bed and was dreaming of other countries
and travels while I had no money at all. For all those days that I woke up at 6 in the morning to go to
Milano only to get back home at 11 at night, so I can get up the next day and do the exact same thing.
For all those first days that I decided to work in a fast food restaurant in Italy to save money for the
master and simultaneously learn the language. Because I knew what I wanted. I knew where I was going.
I knew that I had a long way ahead of me. That nothing would be given to me for free. I should go after
it. 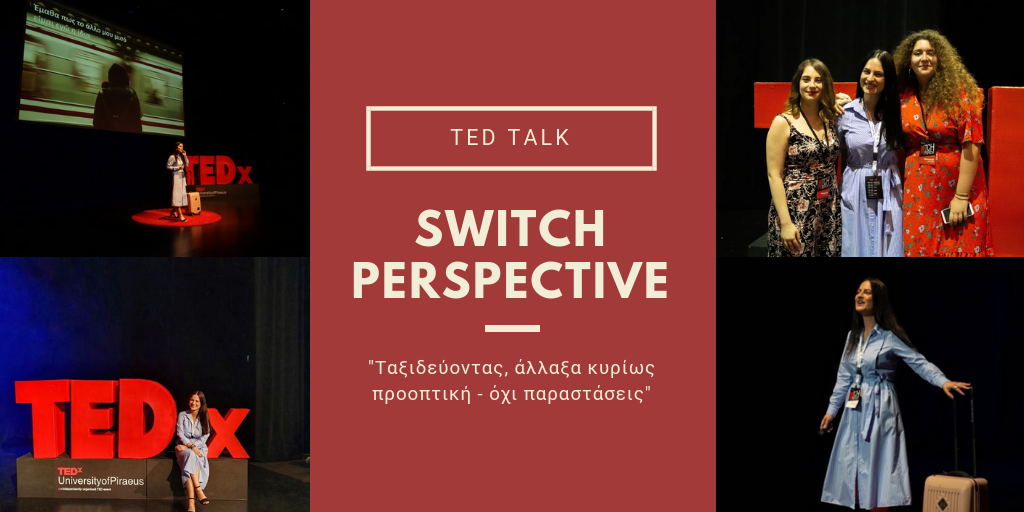 For all those ‘’slaps’’ I took while trying to put my dreams in an order and make them true. It wasn’t
easy. It’s never easy. Because even today I am trying to make my dreams come true. And they are many.

That’s what I also stated in TED at one point. I don’t actually feel a success story that much, as more like
an ‘’ongoing’’ story. There’s a long way ahead yet, but, yes, I realize I have already crossed the half way
and it feels so good.
The last week came around and I was rushing to send my text at the last moment, and attend to the
Wednesday rehearsal along with the speakers’ dinner on Friday, on day before the speech.
Even though this year I had already given three speeches, this particular one made me really nervous.
On the rehearsal’s day I was as white as a sheet, and when I realized that none of the speakers were
holding notes, I got even more anxious. As natural, I made a few mistakes and was off my timeframe for
10 minutes. Perfect!
The big day arrived and despite the previous days’ stress, exactly because I had done the rehearsal I
knew what I had to omit, what I should add, what to stress and tone, so coming to the stage was like
everything went automatically to the right place. It felt like doing the easiest, most common thing in the
world. I was talking to TEDx about dreams, plans, trips, myths falling, change of perspective. About my
life, my dreams, and my vision to inspire and urge other women not to be afraid to dare. And not to be
afraid of traveling (and) solo. 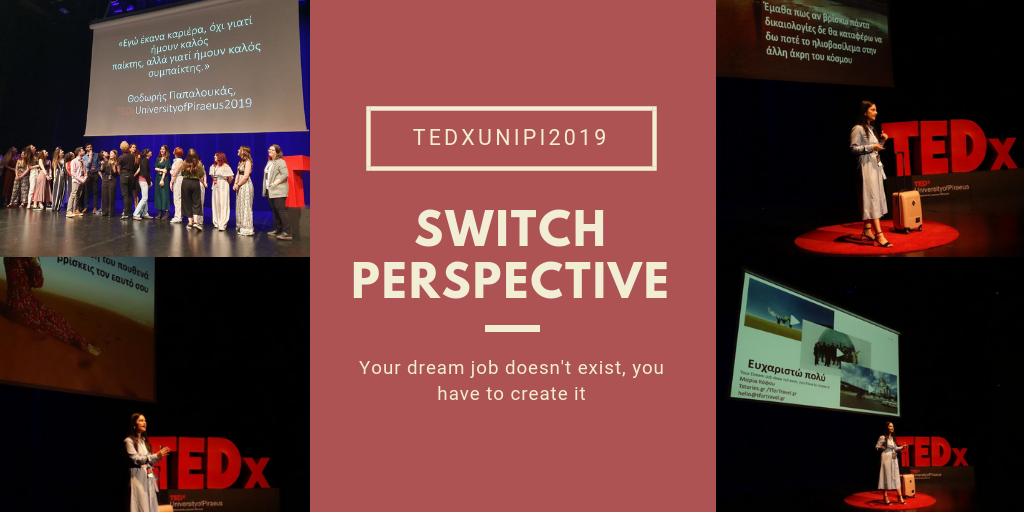 Coming down from the stage, and having with me my favorite luggage(it was the only way for me to feel
familiar in that space), I noticed the TEDx team people, hidden in the background beckoning me that
everything went smoothly, while my sweet Nicoletta, the girl who had sent me the first e-mail, hugged
me with enthusiasm. Everything was perfect.
Until I was out of the amphitheater and having spent time listening to the following speakers, I had no
sense of the whole situation, of what had exactly happened. I think I had put myself in ‘’auto pilot’’
mode all the time. And then I got out, and many people, mostly women and girls, started talking to me,
asking me questions, and commenting my speech fully excited.

https://www.instagram.com/p/Bxphnhbg3_P/
Then I realized that if, today, I had influenced even one person today, even one lady inside the room, I
had then succeeded in what I referred to during my speech. To show to every Greek woman that our
other half is ourselves and, that we have the power to accomplish so many things and by ourselves.
Starting with dreaming, planning, traveling. Because our other half is not out there but within us. We
ourselves are the power we are looking for to stand on our feet, to dream, to act.
At this point I will pause, to gather the tears running from my eyes and I will give a huge thank you to
the team of TEDxUniversityofPiraeus, but also to the people that stood by my side from the start, to
those that believed in me and embraced my madness, to the ones who helped me be where I am today.
Thank you.
Until I get the extract of my presentation, you can find it in the first part of the live video of the day that
took place in TED : 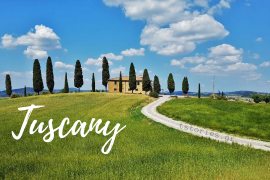 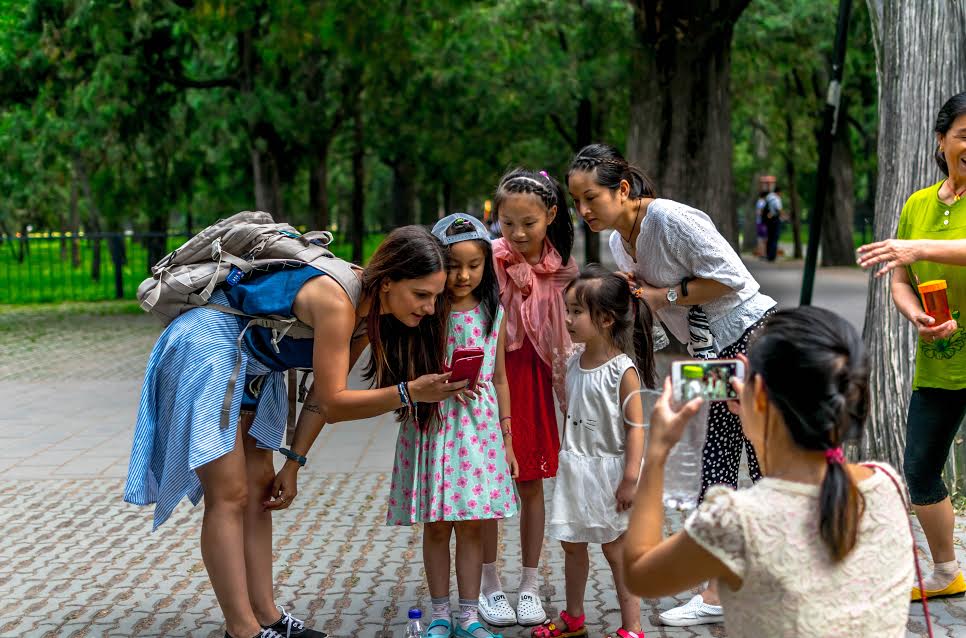